This summer, I had the pleasure of spending time in the land of saunas and pine forests, of rain and water, water, everywhere, of fjords and sailing boats and tall blonde humans. It seems that every family has a cabin on an island, and a boat to get there; every public amenity functions like clockwork; it’s expensive, but superior in quality – of products, and of life, it seems.

For I have stepped into not what one might call a “regular” household for an average Norwegian, but some kind of supercharged version, wherein my wonder at the things I’m getting to see is surpassed only by my disbelief that I know such people who are willing to share their incredible worlds with me. How can I have such impossible friends, whose extreme generosity and privileges of upbringing create a unique window through which I can peek? I can only believe in some force from above, magnetised by my curiosity, bringing us to each other. And so here I am, a lucky soul, sitting in my own good fortune in this long, jagged land named Norway.

Many of my impressions thus far have been formed from the proximity that Oslo has to the sea. That great life, heaving in the Oslofjord, more northerly, more grey than I’ve ever seen it: steel-coloured and shifting like molten metal. It reminds me of something restless, perhaps abandoned, definitely tough.

Immense freedom is to be found at sea. I grew up with the water; but it was in swimming pools, morning and evening, up and down the lanes, several times per week. My time in the water was measured in resting heart rate, personal best, training in metres. One hundred freestyle, 400 individual medley, four times 200 backstroke. Competitions at weekends and medals and time trials. You won’t leave the pool tonight without swimming more than a mile.

My Norwegian friend’s relationship with water is entirely different. He grew up with fishing, with sails, with sea spray flying in his face. His memory is full of knots – as a measure of both speed and security – and he thinks nothing of stripping down to go for a swim. As a child, he fell asleep in the hull to the sounds of his family’s wooden boat creaking all around him, softly swaying in the waves. He treats jellyfish with relative indifference; trout as a potential meal. He seems more comfortable near water than anywhere else. He has a pragmatic approach to the sea as a resource: it’s there to be used, shared, enjoyed in moderation.

In keeping with this, one of my first days in Oslo was spent at Bygdøy, a peninsula near the city centre which houses several museums – three of them ocean-themed. We went to four in one day: first, the Norwegian Centre for Studies of Holocaust and Religious Minorities, which gives a really interesting of the Norwegian Jewish population (which has never numbered more than 2,100) and how they were treated during the German occupation in the Second World War.

Despite the numbers being small, it’s good to see the country acknowledging its role in Jews’ persecution. In addition, the Centre is housed in the former residence of Vidkun Quisling, a name I’ve heard mentioned a lot here: he was a Nazi collaborator when he served as Prime Minister during the German occupation of Norway, and his name is therefore synonymous with treachery or betrayal. It thus seems like an appropriate contribution to justice to turn his former residence into a memorial of sorts for those he helped send to their deaths. There’s also a good film called Max Manus which tells the story of internal resistance to German rule during WWII.

After this educational visit, we went to the Maritime Museum, the Polar Museum, and the Kon-Tiki Museum. All three were wonderfully evocative of Norway’s rich history of exploration. I found myself reminded of all my favourite sea-inspired literature: Coleridge’s Rime of the Ancient Mariner, Hemingway’s The Old Man and the Sea, Michael Morpurgo’s Kensuke’s Kingdom and Alone on a Wide, Wide Sea, Amy Liptrot’s The Outun, Tove Jansson’s The Summer Book. As a child, I gathered books and poems like this and wrote out my favourite lines, which I stuck to my bedroom wall. I always felt drawn to the sea, but unable to access it as I wished. Sometimes I felt I was saving up inspiration for a future time; here in Norway, I’ve feel like I’ve found a way of connecting them to the real world.

The remainder of my days near Oslo were spent swimming in lakes, taking the dog for walks in the rain, thawing in the sauna, and taking my friend’s boat out onto the fjord to circle the many islands that exist there. We spent two nights on the boat in a gently swaying harbour, falling asleep to the sound of the water lapping at the edges of the vessel, mere inches away from our heads. 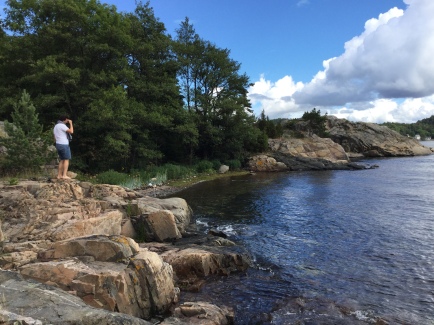 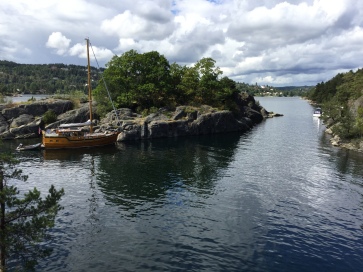 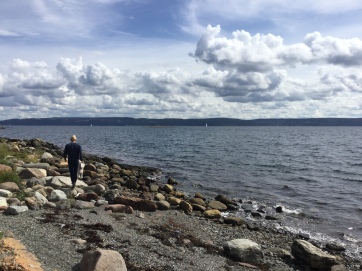 In mid-August, we had a big change of scenery and spent the best days of the whole trip far away from the city. Two hours’ uphill hike from Ljosland Skisenter – I couldn’t say exactly where – lies a wooden cabin. It stands at the edge of a lake, the view over which reminded me of a smaller version of Loch Ness as viewed from Urquhart Castle.

In this cabin are two open fires, several animal skins, endless piles of firewood, the musty air of being closed all winter, and a bubble blissfully insulated from the connected world. Internet and phone signal can be reached only by climbing the nearby mountain – the tallest in southern Norway, at 1,041m above sea level (incidentally very close in height to the tallest hill in Hungary, Kékes, which I climbed three summers ago). And this cabin, incredibly, has been in my friend’s family for generations.

We carried all the supplies we’d need for our four-day stay, which meant lots of heavy food (though thankfully not water – that could be pumped from the clear lake).

There was an almost primordial utility in the way we divided up the practical tasks, matching each other’s skills to each thing that needed doing. I made fires and coffee, washed up, wrote about our stay in the guestbook at the end; the others collected wood, prepared meals, opened shutters on high windows, rowed the small boat across the lake. Together we kitted out the large bed that we would sleep in later.

We all had a turn at fishing. I caught a few small trout, which I returned to the water. Pulling a hook out from where it’s lodged itself in a poor fish’s gills is a real test; I found myself talking constantly to the fish, trying to soothe myself as much as it. It can take ages before the hook comes free, the fish gasping and wriggling the whole time.

We also caught (and released) one or two lemmings, the small, furry, hamster-like creatures that scurry around in these kinds of wet, mossy landscapes.

Indulging these elemental pleasures was immensely fulfilling. Each job took time; it addressed an immediate need, and therefore each corresponding reaction created a sense of balance. I spent hours reading by the fire, wrapped in multiple blankets, and we drank and conversed deep into the night accompanied by a dusty wine box we found in the cellar.

That’s what I took most from my time in Norway. When it came to leaving this bubble of calm, each step we took on the two-hour walk back to where the car was parked felt like a step away from the tranquillity and simplicity of the past four days. Yet I carried it with me, and do still, even back in the city – that sense of internal peace, and connection with nature that is so coveted these days. 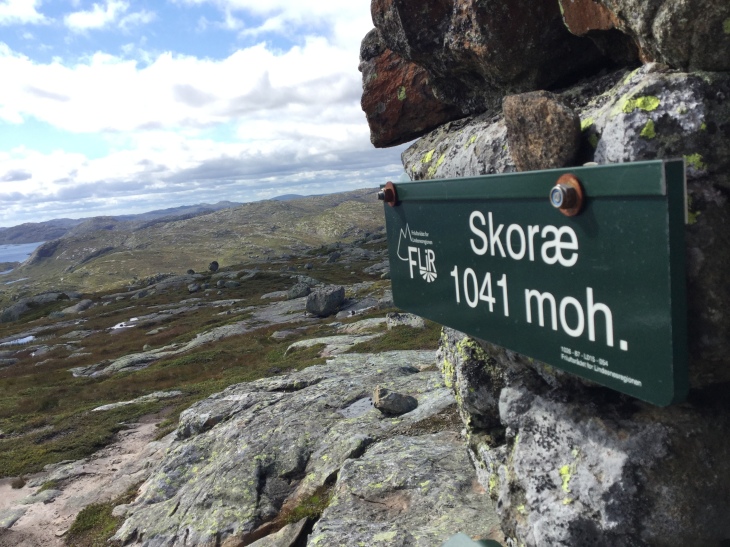 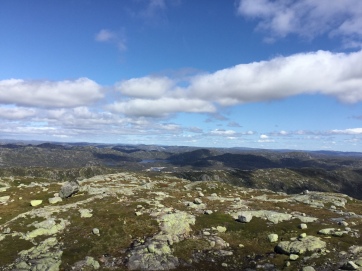